As a regional Episcopal Church in Pittsfield, Massachusetts, we are a faithful community prayerfully responding to God’s call in all that we do.

St. Stephen’s first service was held August 1, 1830, and its present building was built in 1892. The current building was consecrated by Bishop Phillips Brooks, who wrote “Oh Little Town of Bethlehem.” The building is constructed of red sandstone and faces Park Square in the heart of the city. There are eleven stained glass windows in the nave, most created by Mary Tillinghast or the Tiffany Studios—three of which were installed under the direction of artist Mary Elizabeth Tillinghast herself. Of the others, five were made at Tiffany’s and one was purchased in England.

Other particularly notable appointments include a Tiffany baptismal font, and a dramatic pulpit, designed by Tillinghast, with intricately carved twelfth century panels. The altar rail, also designed by Tillinghast, is an interpretation of a choir rail in the Cathedral of Siena Italy. The clerestory windows house the Bishop’s Gallery, which honor twelve bishops who have had a connection with the Diocese of Western Massachusetts. The nave, chancel and balcony seat over six hundred and the chapel seats another twenty-two. 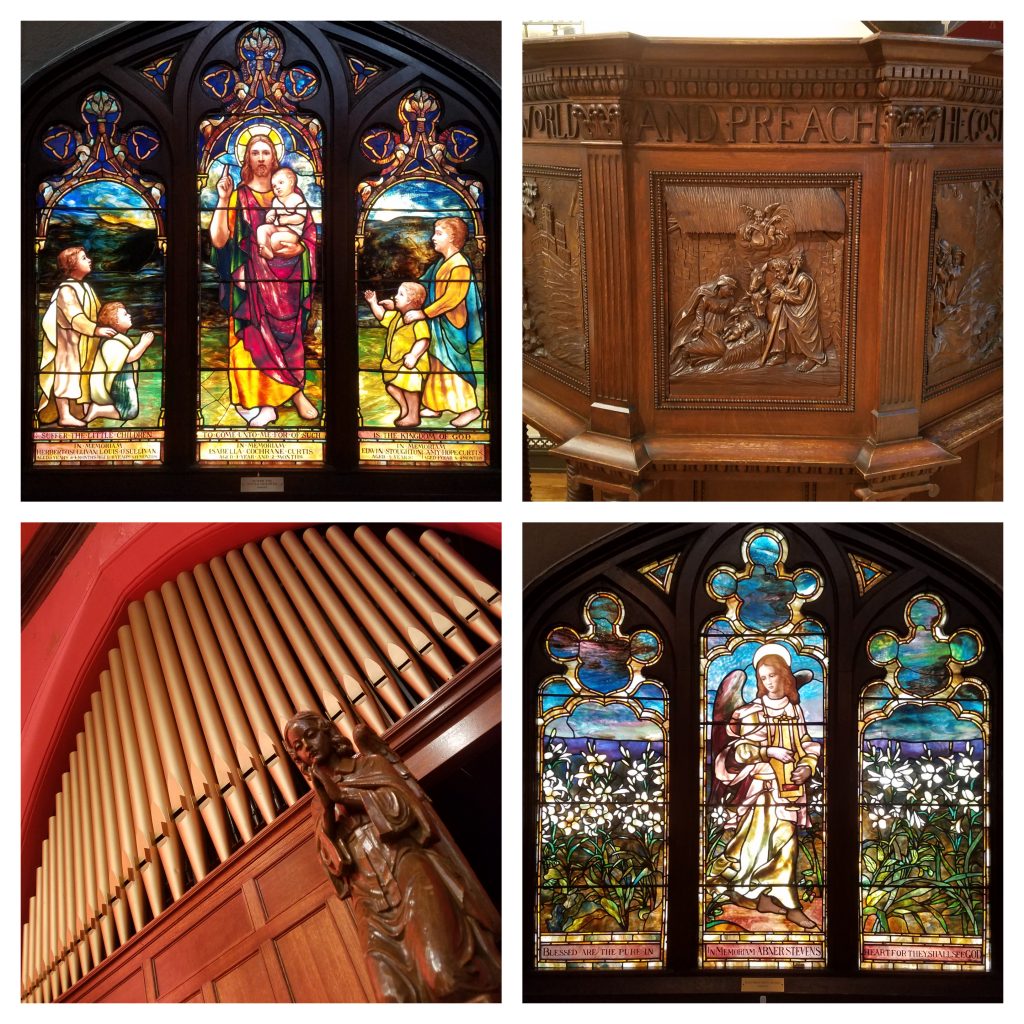 The attached three-story parish house was added in 1918 and expanded in 1956. It contains a dining room with a commercial kitchen, guild room, auditorium and multiple offices, classrooms and meeting rooms. Our parish house has an elevator to all floors and an accessible restroom on the main floor. The parish house contains a dining room (seating 140) with commercial kitchen in the basement, an auditorium (seating 300) on the second floor, an apartment on the third floor, with offices, meeting rooms and classrooms on all floors. The parish house is used for parish activities seven days a week, and also hosts several twelve-step meetings and other community groups throughout the week.

In 1999, St. Stephen’s launched a major capital campaign program augmented by a $100,000 grant from the Massachusetts Historical Commission. As a result of the campaign’s overwhelming success, St. Stephen’s was able to complete necessary upgrades to the physical plant that year and in the years that followed including:

Now, twenty years later, the time has come to address emergent needs of our physical plant once more. Our next major capital campaign is a mere blip on our radar at this time while we instead focus our energy and talents on navigating this time of transition. We welcome and pray for creative collaboration with a leader whose knowledge and ambition will guide us when that time comes.

"To be the heart and hands of Christ;
nourishing people, transforming lives."