Tradition is not rigid obedience. Tradition honors that which is timeless.

The history of Saint Stephen’s Parish dates back to 1830 when Edward Newton met with a group of people at Pomeroy’s Coffee House on Park Square. This meeting launched the formation of an Episcopal congregation. At the time, Massachusetts’ citizens were still taxed by the state to support the Congregational Church, the official “recognized” religion of the Commonwealth. Park Square was dominated by the famous Elm tree, which survived until 1864, and a Congregational Church designed by Charles Bullfinch. By 1832 Saint Stephen’s Church was built nearby, along with a new town hall (currently owned by Berkshire Bank) that still exists today.

Our original church building, a beautiful stone Gothic structure, was designed to satisfy people theologically and emotionally oriented toward the Church of England. Gothic architecture expressed a romantic style characterized by intricate and ornate details. At around 1850, a stone tower and stained glass windows were added to the existing structure. 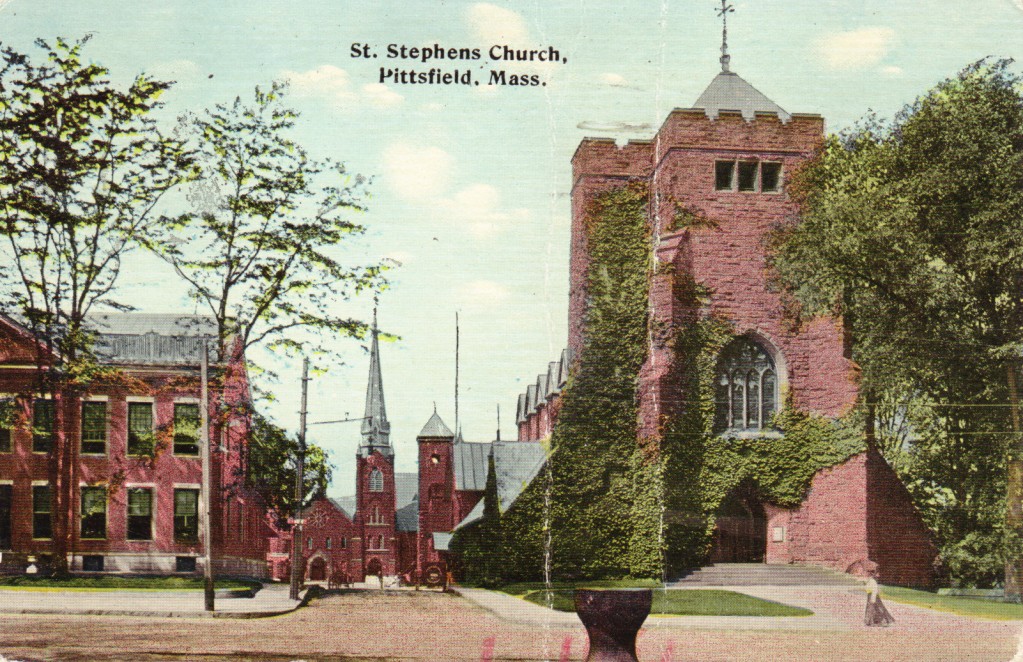 Throughout our history, St. Stephen’s has welcomed clergy with a variety of gifts. At the close of the 20th century, two rectors served during long periods of parish growth and stability. Both the Rt. Rev. Andrew Wissemann and the Rev. Michael Povey were at St. Stephen’s for more than 10 years and are recalled with great fondness by older parishioners.

The start of the 21st century saw a variety of changes at St. Stephen’s, starting with the Rev. Povey’s departure in 2000. His successor, the Rev. James Dannals, was called in 2002. Jim was a gifted preacher and administrator. Unfortunately, his tenure was short, as he and his wife returned in 2004 to the southern U.S. where both had strong family ties.

The Rev. Dr. Hannah Anderson became Rector of St. Stephen’s in 2005. Hannah, an artist herself, cultivated a deeper appreciation for creativity and the arts at St. Stephen’s. She also spearheaded the development of the Berkshire Servant Leadership Center, a ministry which evolved into a diocesan-wide effort within the Episcopal Diocese of Western Massachusetts. Hannah was a fine preacher and had significant experience in congregational development – gifts which helped re-energize the parish during her tenure. In 2012, the Rev. Dr. Anderson was called to become Canon to the Ordinary in the Episcopal Diocese of New Hampshire.

St. Stephen’s welcomed the Rev. Cricket Cooper in 2013. Cricket, another gifted preacher, challenged the parish to develop a vision for innovative building use. One result: the Berkshire Immigrant Center (BIC) now occupies the 2nd floor office space at St. Stephen’s. Cricket was also instrumental in bringing Laundry Love to Pittsfield. And finally, the Rev. Cooper’s tenure was marked by closer ecumenical ties with several other churches in downtown Pittsfield, particularly Zion Lutheran. The Rev. Cooper retired from active ministry in April 2019.

"To be the heart and hands of Christ;
nourishing people, transforming lives."